I’m excited to share that the video of my TEDxSeattle talk is FINALLY live!!!
When I started working on this talk in July, I couldn’t have imagined how vulnerable I would feel, delivering what now seems like a timely counter narrative to a packed McCaw Hall, just 2 weeks after the election.

So…if you like what you see, please consider giving the video a “thumbs up”.

And look forward to hearing your thoughts…

We’re excited to announce that A LOT LIKE YOU is part of this year’s Indie Film Week on KCTS9 Reel NW.  Our broadcast date is Wed 7/20 at 10pm.

KCTS 9’s popular indie film series REEL NW is back, to the delight of film buffs throughout the Pacific Northwest. From thought provoking feature documentaries to narrative shorts, animations, and student films, REEL NW showcases our region’s talents, stunning environment, and the issues that affect us. This summer, REEL NW offers a slate of brand-new films which will air on KCTS 9 July 18 – 24 and stream at KCTS9.org. REEL NW films are made by Northwest filmmakers, shot in the Northwest, or feature a Northwest subject.

“Seattle is home to a strong independent film community and we are honored to play a role in it by providing a vital platform to local indie filmmakers from across the Pacific Northwest,” said REEL NW series producer Laila Kazmi. “The diverse films selected for this year’s lineup celebrate local artists, challenge our perceptions of global issues, and enlighten us about our communities and our environment.”

REEL NW champions the work of a talented local independent filmmaking community by bringing the work of the best and the brightest filmmakers to public television audiences here in the Northwest, and across the country. In 2010, KCTS 9 launched REEL NW to broadcast and stream the best features, documentaries and short films in Washington state, British Columbia and beyond. Since then, REEL NW films have earned seventeen Northwest Regional Emmy® Award nominations and received four Northwest Regional Emmy® Awards.

Check out the lineup, watch the films and get to know the filmmakers through interviews available online at KCTS9.org/reelnw. Throughout the year, exclusive online content will include behind the scenes glimpses, interviews with the filmmakers and web extras. 5 years ago today, Seattle International Film Festival rolled out the red carpet for the World Premiere of A LOT LIKE YOU at my all-time favorite theater, Harvard Exit (RIP).

Being there with my beloved creative team–Tom Kenney, Pete Droge, and Eric Frith.

And having Mom as a surprise guest join us on stage to rave applause.

And for the excitement and joy and love and pride our community showered on us that night.

And for the continuing journey this film is taking me on, both personally and professionally, that is opening more doors for me than I can count.

I am truly grateful…Thank you ♡ 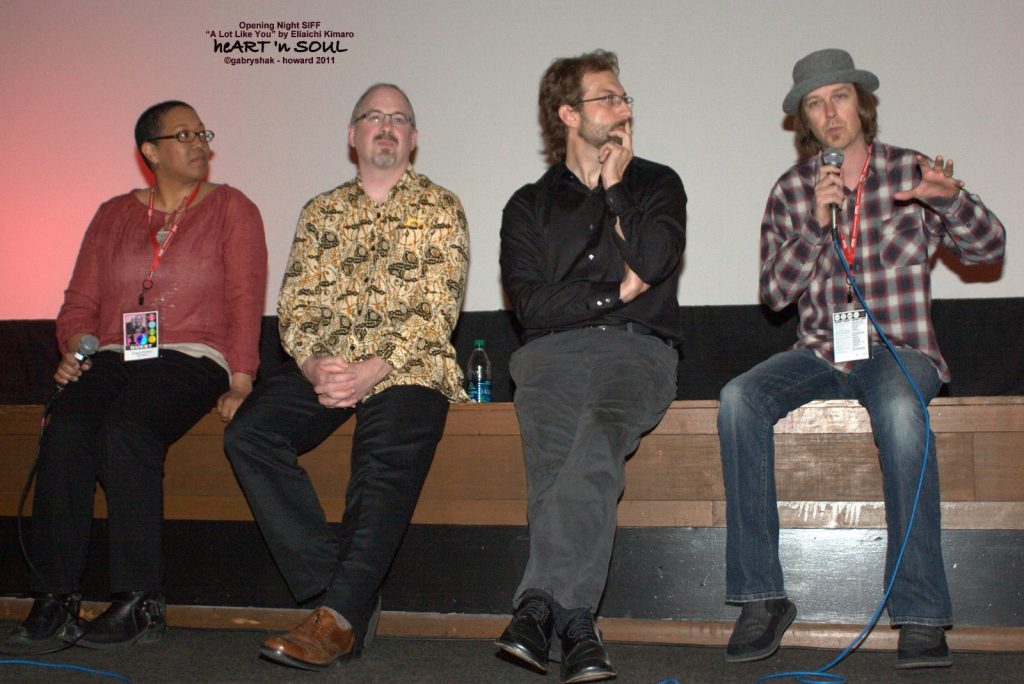 We were delighted to learn that DesignGood named A LOT LIKE YOU one of 9 Docs that will Open Your Eyes.  As their post reads, “[a] compelling documentary can make you see the world in a new way and inspire social change. For today’s Design9, we’re highlighting some current favorites that we think everyone should see…”  And we just love their description of our film…

Filmmaker Eliaichi Kimaro points out that the more intimate and vulnerable the storytelling, the more universal the story can be. In this feature-length documentary, Kimaro journeys back to her father’s African village to fill in the gaps from her childhood in the U.S. and her parents’ life there and in Tanzania. Themes of mixed marriage, gender violence and cultural relativism will make you question your own identity and how your own story will play on for future generations.

We’re so honored to be in such good company.  Check out their complete Design9 doc list here:

9 Documentaries That Will Open Your Eyes

Apologies for the extended absence.  There’s been lots going on over here, and we’ll have some exciting updates in the very near future…plus some longer blog posts about our summer in Tanzania.

But for now, I just wanted to drop in to share some exciting news.  My daughter Lucy Lu (age 9) is a prolific, mixed-media artist who has created countless colorful, joy-filled pieces in her 9 years.

In response to the growing demand from family & friends for her art, we decided to launch this online shop where folks can enjoy — and purchase — Lucy Lu’s latest work:

If you were looking for a Cyber Monday shopping spree that you can feel awesome about…look no further! You can find great art gifts for everyone on your shopping list while supporting a girl-of-color business AND an incredible artist. It’s a quadruple win!

All proceeds from the sale of her art will go towards her education fund. This film evoked a feeling of uncertainty of the space between right and wrong.  The culture of this tribe is so far from our reality that, honesty, I don’t believe that we have the right to label their beliefs and customs ourselves.  This film gave me such an uncomfortable feeling as the women spoke of their experiences and it just seemed so wrong to me, but what the Chagga have through their culture i something I will never be able to understand.  Overall, I don’t really know how to think about such a delicate subject.  Is there even a true right and wrong? I thought that the film was very enlightening and powerful because it was very personal, but at the same time it showed us so much about the Chagga.  I loved how we could clearly see that the topic was important to the filmmaker, and how each story tied in to each other to form a powerful, inspiring whole.  Thank you for putting this into the world.  The world needs to know. Thank you for coming in to talk to us and show your film.  The journey in my mind that your film took me is one one that had too many important stops along the way.

Your film helped me realize the importance of truth and dedication.  I think that so many people were brave in your movie.  Someone who really stood out to me was your mother.  I know that she was not the main character followed throughout your story, but to me she expressed bravery.  She married your father even when her family did not approve.  I think that she was brave to leave her family and be with your father.

I also think that your mom was very brave by holding your secret inside her heart even if it was eating her up day by day.

Your mother teaches me that being brave is not [just] standing up for someone or saying what you feel  It can also be trusting others.  This is something that your film has taught that I will never forget. I was very moved by this film. I think all of the bravery and courage was outstanding.

It was amazing to see the women from the tribe have an opportunity to share their stories the way that they remembered them. The fact that everything was shared on camera was very moving.

I really enjoyed this film and the honesty from the women.